Best Casinos to Play of Dice

Up to 20% Daily Cashback

Dice is yet another popular release by Spribe in their series of unique and original games for the iGaming industry. As such, whenever you find a casino that offers Spribe games, Dice can be found there. We should all be thankful to Spribe for being such a breeze in this hot space.

This should not be surprising at all. As simple as Dice is, the game is attracting more and more players all the time. We truly believe that Dice is going to be getting more popular as time passes. 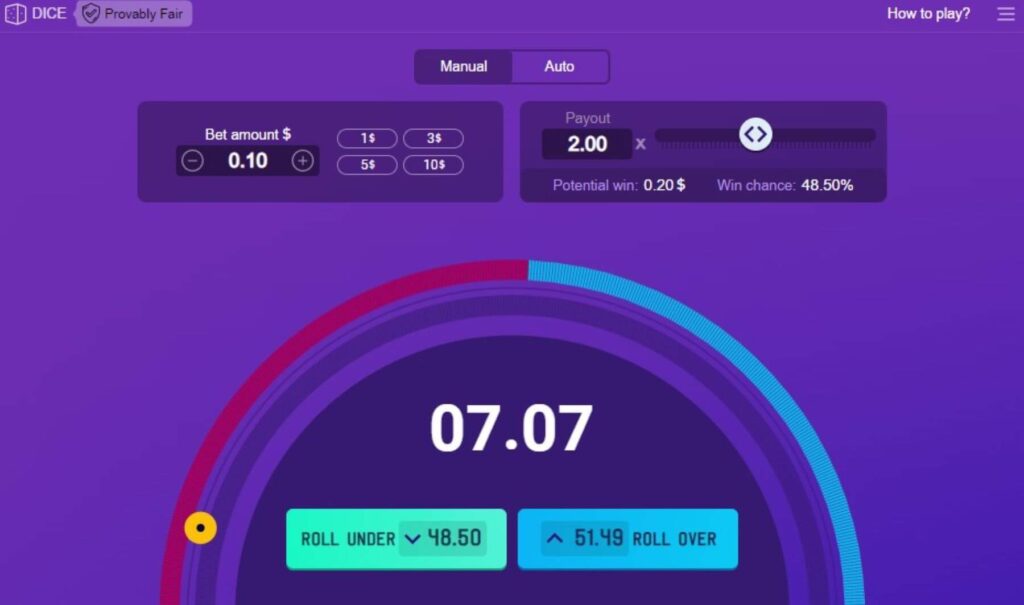 To start off, Dice does not feel like any traditional online casino game at all (aside from Spribe games). It has a very unique feeling, design, and interface, making it a true eye candy. Not only that, but you can play Dice for hours on end.

This is similar to other Spribe games, which makes us wonder what made them go for such a simplistic, yet enjoyable design. However, it doesn’t really matter as it is doing the job amazingly.

With that being said, let’s move on to the rules of Dice. It is quite a simple game that is easy to understand and build confidence in.

The point of Dice is to predict whether the number is going to be higher or lower than the designated one. Although the game is named Dice, it has nothing to do with dice. Instead, there are two arcs – one for each button. Depending on the multiplier you decide to go with, the numbers on the buttons will change.

To break that down, let’s explain what each button and its arc do.

The right button is the “Roll Over”. It is just the opposite of the first button. It yet again has its own arc, but this time it is the top arc. Let’s give an example with the 2x multiplier – in that case, the button will be “Roll Over 51.49”. Once again, if the number is higher than 51.49 you will win the bet * the multiplier.

There’s an “Auto” feature that we do not recommend using, but if you want, feel free to try it out.

Spribe’s official website shows that Dice has a return to player (RTP) percentage of 97%. This is the RTP that most of the software developer’s games come in.

If you compare this rate with other casino games such as slots, it is actually quite high. The gold standard for slots is 96% RTP.

The volatility of the game will solely depend on how you decide to play it. This is one of the unique things about Spribe games, making it such an attraction for all sorts of players.

For example, you can place only 1 mine on the field, which will mean low volatility, but also low prices. On the other hand, if you place 15 mines you will be playing in a highly volatile environment, meaning there’s a bigger chance of losing, but also a better chance to win big.

Our suggestion would be to go for the lower spectrum of mines during gameplay. However, if you wish to play for the big wins, we suggest placing a smaller bet. It’s all up to you.

Mines, just like Aviator, has no specific hacks/algorithms/patterns you can abuse. Of course, similar to any other game, there are many who claim to know how to “beat” and abuse the game.

A lot of information can be found throughout the web, with no solid proof. Some people show their total winnings and use that as a way to prove they’ve found a “loophole”. However, let’s be honest, a software developer will never let such a thing slide.

On the other hand, there are people who’ve proven that playing safely is better in the long run than playing for the maximum win.

With that being said, we’d like to provide a couple of tips to consider.

Demo versions are also a great way to figure out your own strategy. For example, in Mines, you can try testing how the different numbers of mines affect your gameplay. Since you will be playing with virtual (non-real) money, you will be able to track your wins and losses.

However, there’s a third say. Betting through a volatile multiplier. This is probably the best way to play this game. We suggest you test out playing for a small multiplier a couple of rounds and switching to a bigger multiplier for one round.

Dice, although it has nothing to do with dice, is a great game that’s been around for a little while. And although Spribe games are gaining a lot of popularity, we’re still eager to see what the future holds for their games. We are pretty sure they will see more adoption, and for a good reason. Try it out yourself!

My name is Victor Stuard and I am passionate about crypto-currency, blockchain, fair gambling and new technologies. I have been in the crypto mining for the last 7 years and since the first Bitcoin casino was launched. I am here to help you finding the best crypto casinos and compare their pros & cons.